Prince of Persia and the birth of motion capture...

Jordan Mechner, the creator of the original 1989 state-of-the-art animation game Prince of Persia, has recently released the videos he took of his brother that he used for the animations in the game. When this game was released, it really took animations on the PC to a new level. For those that remember playing the game, I'm sure you'll recognize the moves performed in the video—especially his brother "struggling" to get up the wall.

It's pretty impressive to see the original footage that lead to the ground breaking animation. It's basically the birth of motion capture in video games.

I was just looking over the song list announced for Rock Band 2 and the inclusion of Dream Theater really caught my eye. While I would have picked a song different from Panic Attack, I'm giddy to see Dream Theater show up in a game like this.

Some other song that caught my eye were:

I saw this a week or so ago and thought it was worth watching again. Even if your not a fan of the game, I recommend watching the video just so see what an incredible job the guys at Rockstar did creating a realistic environment.

The video contains no violence and just shows some camera panning around the city. In the first scene, just watch the sky. It's amazing how realistically the clouds move and it's cool watching the occasional plane fly over head.

The author of the video had this to say:

"As I was playing the game, I realized the potential for time lapse filmmaking thanks to the day/night cycle and all the varying weather patterns.

This work was achieved by using one particular motorbike in the game (and the odd helicopter) which offers an uncluttered frame, free of any bodywork in shot. The shots required cramp-inducing holds on the controller for sustained periods of time, in order to get slow and steady shots. Slow pans required delicate movement of the thumb sticks. There is no way to cheat it. Everything is done in-game without glitches, just lots of experimentation and patience.

Fortunately, Rockstar Games gave the means to turn off the HUD, etc, and created a world vibrant enough to allow this type of creative outlet."

I haven't seen this tip anywhere (because maybe it's too obvious, I don't know) so I thought I'd share it. You can safely bypass paying your tolls driving straight through the middle gap between all the toll booths on a motorcycle. You need to be on a motorcycle, because it's the only vehicle that will fit. :)

Sometimes I don't feel like outrunning the cops and don't like slowing down to pay the tool, so slipping between the booths saves me a lot of time (although I admittedly have been using taxis more and more often—it's just a great way to quickly get from point A to point B.)

Gary Gygax, co-creator of Dungeons & Dragons and one of the fathers of tabletop role-playing games, died on Tuesday at the age of 69. He had suffered from heart problems.

The news was first announced on the message board of Troll Lord Games, the publisher of Gygax's most recent works. It has since been directly confirmed by the company, which will post an announcement on its Web site later Tuesday.

Gygax was best known for helping create Dungeons & Dragons and Advanced Dungeons & Dragons. He also pioneered tabletop role-playing games. The first D&D rulebooks were released in 1974 by TSR, and since then have produced three full-fledged sequels, numerous revisions and updates, and dozens upon dozens of additional rulebooks, settings, and campaigns. While Gygax hadn't had much direct involvement with D&D for many years, he developed and contributed to many role-playing games, including Troll Lord Games' Gary Gygax's Fantasy Worlds.

I saw Marco Casario's post yesterday about Johnny Chung Lee experiment using the Wii controls to create VR effects. I about gave up on the video, but then he got to the actual VR portion of the video and I must saw the effect is extremely good.

In the past the best 3D/VR effects I've seen were based on polarized 3D glasses—where there's a shutter in each lens that alternates between off and on (when one lens is on, the other is off.) This creates a pretty decent visual effect, but it can definitely lead to headaches.

This is by far the best example I've seen of 3D/VR on a purely 2-dimensional screen. The effect that Johnny is able to achieve is quite remarkable. I recommend watching the entire video, but it gets really interesting about 3/4 quarters of the way through.

If this video gets pulled, just trying searching for it.

Rockstar came up with a cool way to unveil the new box art for GTA4. They used a bunch of mural artists to draw the box art on a wall and then published the time lapsed video. I like how this approached worked.

Amazing Flash Game - Get The Glass

My brother sent me this link just a few minutes ago. This has to be one of the most impressive pieces of Flash I've seen in a long, long time. Kudos to the firm that did this work for the California Milk Processor Board (aka Got Milk?) 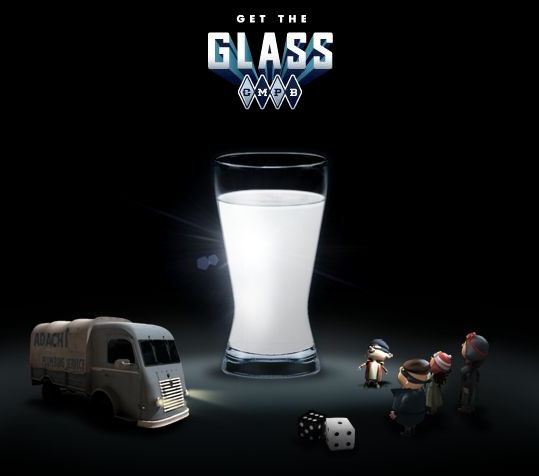 Looks like the old URL is now taken over by spammers. The game can still be found here: http://www.crazygames.com/game/get-the-glass

I own a Sony Playstation Portable (PSP). It's a great handheld gaming device—blows away everything else I've seen. However, the one big battle that PSP owners have had w/Sony is wanting to run "homebrew" applications (these are unsigned applications written by users for the PSP and not officially released software.) The original firmware 1.2 had some holes in it that allowed you to pretty easily bypass the mechanisms Sony built-in to allow only signed content to play.

Every since hackers figured out a way to hack the PSP's firmware, it's been a battle between Sony and the hackers. Sony releases a new firmware that fixes the holes and hackers try to figure out another way to bypass the Sony security mechanism to only allow signed content to play.

Each time Sony releases a new firmware, they've generally added some new functionality to the unit. The original PSP firmware didn't include a browser—which was added in the 2.0 release (I believe.) Anyway, Sony tries to entice users to upgrade by offering new features and even having newer games force a user to upgrade. Some hackers are living on old firmware just so they can continue to run their "homebrew" applications.

Jim Rutherford over at Digital Media Minute blogged about a next generation JavaScript console which is a Firefox v1.5 extension called Console².

This extension adds a lot of necessary functions to the Firefox JavaScript Console window (which is renamed "Error Console") such as: sorting errors, filtering errors by type (CSS, JS, XML) and you can even search over the errors.

Ok, so while the "official" PSP v2.0 firmware for the US hasn't been released, it has been confirmed that the Japanese release that came out today will in fact work. Here's what you need to do:

I've just installed it. I'm so excited about being able to finally use the WAN feature. Up to this point I haven't been willing to move back from WPA-SKA to WEP.

New PSP Firmware On It's Way!!!

There's a new PSP firmware on it's way.

Control Your Desktop With Your PSP...

Control your desktop and/or server using your PSP with this VNC hack.

Another day, another PSP hack. The madmen at PSPUpdates.com posted PVNC v1.1, a VNC client for the PSP that allows you to connect to and control other computers running a VNC server. The program recreates the desktop of a remote computer on your PSP screen, a boon for the busy sysadmin who doesn't want to leave the toilet stall where he/she is playing Lumines to check on a server.

Well I finished the single player campaign of Far Cry yesterday. Overall the single player is excellent, although I was slightly disappointed by the ending (of course, I think the endings of most games are disappointing—I can't really think of any that lived up to my hopeful expectations.) The AI and graphics are simply amazing. For those of you expecting boss-type battles, you'd be disappointed—as there aren't really any boss-type battles. The game is still very challenging and is definitely worth playing. I may go back and try it in "realistic" mode just to see how bad I get my butt kicked! :)

I'm now looking forward to playing multiplayer mode online. I'm trying to convince some of my friends to buy the game so I can play online w/them. I've at least convinced a couple of them to go an download the demo.