Visual IP Locator based upon AJAX and the Google Maps JSAPI...

Matt Inman has released a little AJAX application that uses the Google Map Javascript API to visually display the location of an IP address.

Creating a visual IP address map isn't a perfect location, so don't expect to see your home address show up. Instead, they usually do a pretty good job of tracking the IP address back to your local ISP. Interesting product none the less.

CNN's running a story about the British used "rock" to spy on Russia. Pretty interesting story and something I've never really given much thought to. It would be really easy to hide something in a rock that used bluetooth (or some other short range transmitter) to exchange data. I would have thought they'd have placed the rock next to a bench or something though.

I find this nifty Firefox extension over on the Digital Media Minute blog. The FireBug extension is basically a combination of a DOM Inspector, JavaScript Console and XmlHttpRequest packet sniffer—all wrapped up into a Sidebar component.

I haven't played around with it very much yet, but for a "pre-pre-alpha" seems to work very well. I did notice that the keyboard shortcut to show the sidebar, does not hide it if it's already visible. That's the only thing I've found so far.

The Steelers Going To The Superbowl!

The Steelers are going to Superbowl! I'm so damn excited, I can't calm down. It's been 10 years since the Black-n-Gold last represented the AFC in the Superbowl. They need to come out and execute like they've done the past 3 weeks. Fortunately, Detriot is a short hop from Pittsburgh and they have 2 weeks to prepare.

Well, I've finally calmed down enough to post about the Steelers game yesterday. Jenn & I were on the edge of our seats. I think it's a real a shame that the game was even close at the end, because the Steelers completely dominated the Colts and the officiating was horrendous. I won't harp on that though. I will say, it's games like that when I understand why there are people who are convinced the games are fixed. I don't believe that, but that game was very poorly officiated.

Jenn & I were really on the edge of our seats for the finally 2 minutes of the game. We went from total exhuberation when the Steelers sacked Manning on 4th and 16 on the 2 yard line, to the complete and udder disbelief when Bettis fumbled the ball. Cowher absolutely made the right call, it was just a fluke result. The Colts still had 3 timeouts left at that point. The correct call was trying to put the game out of reach by putting up a 10 point diferential. Anyway, it took Jenn & I both a good 3 hours to really calm down. Jenn was still telling me later that night that she was still feeling the results of the game. This was the first time she's ever felt this kind of emotion over watching a sporting event. I'm so lucky she's enjoying watching Steeler football with me (although she'd probably argue how "enjoyable" it was once Bettis fumbled.) However, the emotional swing you feel as you go from knowing you've won the game, to thinking you've lost it, to watching Vanderjagt miss a FG he makes 99 out of 100 times to give you the win is something you just don't experience in any other spectator event. I love football.

I can't say enough about how well Cowher had that team prepared to play that game. He came out throwing the ball when the Colts were expecting us to run and the Defense had the Colts completely on their heels. Lebeau had a beautiful game called. For those that don't watch the Steelers on a weekly basis, you wouldn't have noticed this, but the Steelers tend to use a lot of motion with their Defensive Backs to try and confuse the QB. Generally speaking though, Manning is good at adjusting to that. Lebeau used very little movement before the snap—which I think Manning was relying on to try and figure out the blitz schemes. If you notice, it wasn't until very late in the game that you saw Manning started to call more audibles on the line. Heck, I even heard Archie, Peyton's father, on NFL Radio this morning and he admitted that Peyton had to resort to "drawing plays in the dirt--playground style" in order to counter the things Pittsburgh was doing do them.

Quickly detecting if a Verity collection exists in CFMX

I ran into some problems with some code recently that had been written for pre-ColdFusion MX 7. The code in question was designed to create a Verity collection if it didn't already exist.

In past versions of ColdFusion, if you invoked the <cfcollection action="create" /> tag on a collection that already existed, you simply use a cftry/cfcatch to skip doing an error. So, the developer before me had been writing lines of code like this:

Phillips has a new line of televisions they call MiraVision TVs. The basically idea is that, when turned off, the televisions act like a mirror. This is actually a really cool idea. It allows you to completely disguise your television when it's turned off. Would look real nice in a living room. 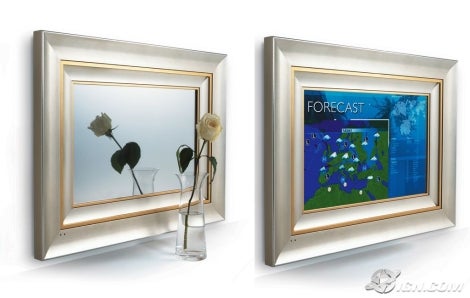 This has hit some blogs, but I haven't seen it widely mentioned. Damon Cooper posted a vague entry about "Mystic"—which appears to be a version of ColdFusion targetted to be released. before "Scorpio" (which was thought to be the next version of CF—potentially v8.)

There hasn't been a whole lot of gossip about the new version of ColdFusion in the last few months—mostly I suspect because of the Adobe/Macromedia merger. Anyway, hopefully we'll start hearing more news now that the merger is complete.

TB-Tray is a launcher for Thunderbird, which stays in memory and will "hide" Thunderbird to the systray instead of the taskbar. It actually has a lot of configurable options for a launcher. I've been using it in one form or another for almost a year. I really hate having my E-mail client show up in the taskbar. It's one of those applications that I almost always leave running and just don't see a need for it eating up a spot on my taskbar.

If you use Thunderbird, I'd highly recommend this application.

Thunderbird v1.5 was released today. I use Thunderbird for my day job and have been anxiously awaiting the next release. Here's a break down of some of the new features from the Mozilla website:

The guys over at Adaptive Path have released a Flash-based Date Slider that can be controlled via JavaScript.

The Data Slider widget is pretty darn slick. What makes this Date Slider unique is that it is design to show a bar graph of results and you use the slider to narrow down to a specific date range. You could then use the selected range to zoom in on the data, or maybe show a detailed report history from that time frame. Here's a screenshot:

I'm working on some legacy code that uses a MS SQL Server 2000 database. In one of the tables, there's a phone number field that is a varchar column. The application essentially treats a "Phone Number" as straight text, so there can be any type of value in this column.

Normally when I design a "phone number" field, I always remove formatting and rely on the view to display the phone number correctly. This provides consistency and allows for easy searching of phone numbers.

The problem I've run into is that I need to provide phone searching capabilities that will find a phone number regardless of how it's formatted in the column, but I can't change the existing data. Unfortunately, MS SQL Server 2000 doesn't have support for Regular Expressions and it's built-in pattern searching isn't powerful enough to do what I want to do.

A follow up from my blog post on Wednesday. Looks like peer pressure really got to Microsoft. An official patch to the WMF vulnerability was released late yesterday. If you don't have your PC set to automatically update, make sure to go visit the Windows Update site (make sure you're using Internet Explorer) and patch your system ASAP.

So much for Microsoft sticking to their patch release schedule. Personally, I'm glad they didn't wait. They should be releasing patches as they're available. If corporations want to wait and release things on a schedule, that's fine, but let us contractors and personal users fix our computers as quickly as possible.

This isn't exactly breaking news, but there's a very nasty bug in Windows 2000, XP and 2003 that has just recently been revealed being called the "WMF vulnerability." The bug has to do with a vulnerable function in GDI32.DLL library that can allow a malicious hacker/web site to install a virus/spyware on your computer.

What makes this bug extremely dangerous is any program that views images (such as Internet Explorer, Firefox, etc) is vulnerable.

Microsoft is claiming that there will not be an "official" patch for this bug until next week. However, this thing is nasty enough that everyone running Windows 2000, XP or 2003 should take some kind of action now.