Bear snacks on sub, and I'm not talking about the sandwich... 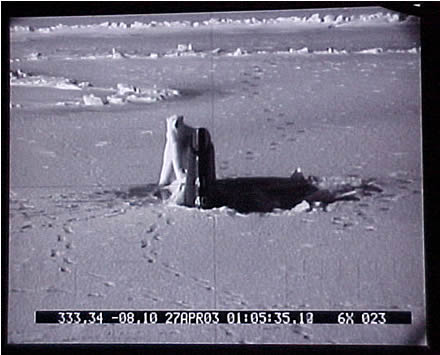 During the ICEX 2003 naval exercises near the North Pole, the American submarine Connecticut (SSN 22) poked its sail and rudder through the ice. When an officer looked around outside via the periscope, he noted that his sub was being stalked by a hostile polar bear. The periscope cam was turned on, and these photos of a polar bear chewing on the subs rear rudder resulted. The damage was said to be minor. The SSN 22 is a Seawolf class boat, one of the navy's newest submarines. It wasn't designed as a polar bear snack, but that's how life is sometimes.
- StrategyWorld.com

The Steelers, for the first time ever, are offering a football fantasy camp for men. I wish I would have found out about this sooner. I wonder why the Tribune-Review only publisized this a week before the camp was supposed to start? Anyway, I'll have to keep an eye out for this camp next year!

The Steelers will give their male fans an opportunity to taste the life of a professional football player when they hold their first fantasy camp for men June 6-8 at St. Vincent College, near Latrobe.

Registration must be made in advance and costs $349 per person. Further information can be found on Steelers.com or by telephoning 412-697-7713.

Spock's Beard has released an mp3 sampler of their new album. The song excerpts are from "Feel Euphoria", "East Of Eden, West Of Memphis", "A Guy Named Sid", "The Bottom Line" and "Ghosts Of Autumn". They're only going to live the sample online for a bried period of time due to the bandwidth issues it's caused. I download the sample and listened to it for a bit last night. The music sounds great, but I think I'm really going to miss Neil Morse's voice. I'm not saying Neil had the greatest voice in rock or anything, but it's definitely become a big part of Spock's Beard for me. Also, I bought Nick D'Virgilio solo album—because I think he's a fantastic drummer and musician. I was pretty dissapointed in the album overall, it just didn't have the same kind of creativity as SB does. Well I think Nick's voice is good—and fits in great as background vocals, I thought the vocals on his solo album were a little bland. I'm hoping he's mixed things up a bit more for Feel Euphoria. Anyway, go to Spock's Beard's website for more information.

Legendary Western outlaw Billy the Kid is supposed to have died after pistol shots rang through the night in the New Mexico desert 122 years ago, and a local sheriff's office has reopened the books on the event to find out just who shot whom.

There are many stories about the death of Billy the Kid, with the prevailing history saying that Billy was gunned down by one the state's most famous Wild West lawmen, Sheriff Pat Garrett.

Ok, so I haven't updated the site w/my goings on as of late. Well, that cold I had really kicked my ass. I ended up spending the 3 day weekend in pretty much resting—I even ended up having to miss Justin's birthday/house warming party on Memorial Day. I just didn't want to risk getting everyone else sick—especially since everyone would be eating and drinking. Jenn's been sick since last Wednesday or so as well (I feel bad about giving her my cold.) She's feeling worse today and even stayed home sick.

Anyway, Maddie and I had training class on Tuesday night. She was pretty distracted during the class—she just can't get used to that "Gentle Leader" collar. Overall she was ok, but she just seemed restless the whole class. I'm going to spend more time working on training this week—it's obvious that I haven't spent enough time on the exercises up to this point. I went home for lunch yesterday and we spent the whole lunch working on training exercises—we also practice a bit more in the evening. She listens wonderfully as long as she know you have a "treat" in your hand. :)

Works going fairly well, I'm making good progress on my current project (which is due the end of June.) The biggest problem I'm having w/the project is the code has to run in CF v4.01—and I'm having problems finding compatibility charts to find when certain functions were introduced. There's been a lot of changes to the language in the past 4 years, and I've forgotten a lot of the rules for programming in CF4 (since the rules change from version to version.) I'm also really missing the "Request" scope.

I have to say I'm really disappointed with Verizon Wireless' current selection of mobile phones. I've been looking to upgrade for a while, but they're really behind the other companies—like Sprint PCS—in the area. The messed up part is that Verizon by far has the best coverage—at least in the Columbus, OH area.

I was on Sprint up until about 8 months ago or so and finally got fed up w/Sprint after 4 years of pour digital coverage in the area. Overall I'm happy w/Verizon's network coverage—I'm just not happy w/their phone offerings. They really need to step up to plate and get some phones that compete with the feature base of some of their competitors.

Users of file sharing programs such as Kazaa and iMesh are urged to install a security patch after a serious bug was discovered in their underlying network.

A security researcher recently found a potentially critical vulnerability in the program which drives the FastTrack network. FastTrack is used by peer-to-peer software service including Kazaa and iMesh. Joltid, the maker of FastTrack, initially said the flaw was not serious, but has since done an about-face and plans to plug the loophole.

The makers of Kazaa released a patch Tuesday and are urging customers to install it as soon as possible.

Dream Theater just released their own mini-record label—Ytsejam Records! This label basically seems driven by Mike Portnoy (the drummer for Dream Theater.) The site will sell "official bootlegs"—which I hoping means are going to be rather high quality bootlegs.

There's actually a couple of interesting titles already posted—a live recording featuring both Bruce Dickenson and Ray Aldur and another which has some studio recordings from The Making of Scenes From A Memory. I'll be curious to see what happens with the site.

PS - DreamTheater.net doesn't even have this information posted—but I think there's some information about the new record label at Mike Portnoy's website.

This is my new BlogChalk:

Article: From PlayStation to Supercomputer for $50,000

As perhaps the clearest evidence yet of the computing power of sophisticated but inexpensive video-game consoles, the National Center for Supercomputing Applications at the University of Illinois at Urbana-Champaign has assembled a supercomputer from an army of Sony PlayStation 2's.

The resulting system, with components purchased at retail prices, cost a little more than $50,000. The center's researchers believe the system may be capable of a half trillion operations a second, well within the definition of supercomputer, although it may not rank among the world's 500 fastest supercomputers.

Here's the track listing for the new Spock's Beard album due out in June:

I updated my blog so you can now page through the entries—which means you can easily access older blog entries. If you're only interested in seeing a specific category, just highlight the category and start paging through my entries. It was getting pretty difficult to find specific entries since the blog software only showed the first 15 entries for the selected category.

Not A Very Good Raincoat...

I'm pretty sure I wouldn't want to be wearing this during a rain storm. :)

Dubbed "exo-electric armor," the No-Contact Jacket looks like an ordinary fashionable women's coat. But an inner layer of conductive fiber carries a low-amp charge that delivers a nasty but non-lethal shock to anyone who messes with its wearer.
- Wired News The solo EP "Twist Of Fate" by former Fates Warning front man John Arch is now available for pre-ordering at CD Universe and Amazon.com. "Twist Of Fate" is approximately 20 minutes in length and features Jim Mathoes (Fates Warning / OSI) on guitar, Joey Vera on bass and Mike Portnoy on drums. The EP will be released by Metal Blade Records on June 17th, 2003.
- DreamTheater.net

Claus Wahlers has just released a public beta of his "Deng" browser. The "Deng" browser is a Flash MX-based browser. Here's a quote about what it is from Claus' website:

If you are on a machine with Windows OS, you can now download an early beta version of The DENG Browser! The DENG Browser basically is the DENG Modular XBrowser Flash MX Component wrapped into a Screenweaver C++ Shell. The final release version is going to support CSS2, CSS3 Namespaces, SVG Mobile Profile, XHTML Tiny, XForms, XFrames and much more. All of these technologies are already ready to use in this Beta (with limited functionality yet though.. Also note that this is not supposed to replace your Mozilla or IE6). The Browser also comes together with a set of sample XHTML, SVG and XForms documents.
- DENG Beta Website