The Steelers' Super Bowl rings were given to the players yesterday. Pretty cool design. I was a bit surprised that the ring included all 5 trophies in the background, as Dan Rooney has been very stout in his opinion that he wanted to keep this win separate from the wins in the 70s. However, I found this quote from Jerome Bettis that I think sums things up nicely:

It was Bettis who convinced Dan Rooney to include the team's four previous Super Bowl victories as part of the franchise's fifth ring, and why it has five Lombardi Trophies in diamonds on the face.

"He didn't want the other championships to overshadow this one,'' Bettis said. "I wanted to let him know that it was important that the other ones be involved because we had to live under that shadow. Now instead of us being separated, we're part of that family.

"As a player walking by those four trophies every day, I wanted to include those into this. It's part of the history and we're part of it. We wanted to feel part of it."

Here are the pictures: 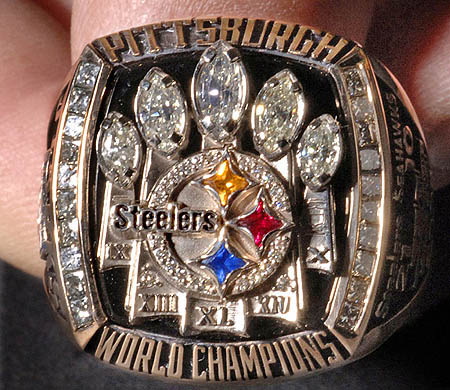