I proposed to Jenn tonight.

So, I decided to take Jenn to Mills of Clifton Gorge—where they do a huge Christmas Lights display every year.

I'm glad I decided to do it tonight because I was able to catch her off guard. We went to dinner with my parents before heading to Clifton Mills and had a nice little dinner and a new Barbeque restaraunt in Springfield (I know, how un-romantic.) After dinner we drove down the road to see the lights. Took us an hour to drive about 10 miles do to the number of people going to see the lights.

I ended up proposing overlooking the lighted waterfalls. Jenn was crying and wouldn't even take off her gloves for me to put the ring on her finger. I had to ask her to remove her gloves so I could put the ring on and make it official. She kept telling me she loved me, then she'd say "You Suck" and then tell me she loved me again. I'm pretty sure she said yes in there as well, but she definitely took the ring! 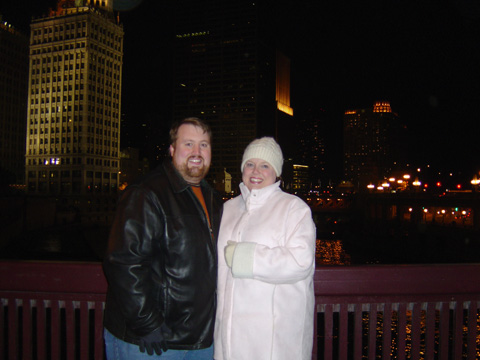