Matt Liotta suggested on the CFCDev listserv that a "bakeoff" occur to get some comparison metrics on all the different proposed frameworks and methodologies which would leverage the capabilites of CFMX.

It appears that several developers are game to this idea and the current concensus is for everyone to write a "Blog" application in CFMX. Here's the original message from Matt:

It seems that since the release of CFMX many CF developers have been rethinking how they build CF applications thanks to new abilities through the use of CFCs and/or tighter Java integration. This has led to quite a lot of discussion over frameworks and methodologies as of late. I thought it might be interesting to have a bakeoff to get some comparison metrics on these different techniques.

The idea would be to take one set of application requirements and then build an application using each of these techniques. Metrics like time taken to develop, lines of code, performance, etc could all be captured for each. Obviously, developing all of these applications would take a considerable amount of time. However, if many people were interested we could each take one technique each and then share our results.

How come weekend trips wear you out so much? I guess it's the lack of sleep, but the Monday after a weekend trip always leaves me desiring more sleep. I really miss the days of being able to sleep until 11am, getting up at between 6 and 7am on the weekends really stinks.

The trip to Jenn's house went pretty well. My puppy (Maddie) and Jenn's brother's dog (Sadie) played pretty aggresively, so they had to be watched pretty closely. They both seem to have a blast, but if you don't make them split up from time to time, they'll never stop playing. Maddie definitely demonstrates alpha dog traits—any time Sadie had something Maddie would go take it from her. She's also listening less and less—I think I need to spend more time on training and I'm seriously considering obedience training.

On the drive home last night, my parent's called and said they were in the Hilliard area. We were still about an hour outside of Hilliard, but my parents managed to find something to keep themselves busy until we got home. It was nice to see them. It's kind of sad, 'cause I think my dad was more interested in seeing the puppy than he was seeing me. :) I guess that's what it must be like to be a parent. It was a nice little visit and I'm glad they were able to stop by.

DISHONORABLE DISCHARGE?: U.S. military to expel FOX NEWS CHANNEL's Geraldo Rivera from Iraq after violating rule, rival CNN claimed Monday morning; giving away crucial details of future military operations during live broadcast... Rivera drew a map in the sand indicating the position where the unit which he was embedded with was located, where they were going... Members of the 101st Airborne Division will escort Rivera to the border with Kuwait, said CNN, quoting a Pentagon official... Developing...
- The Drudge Report

A friend forwarded me this link, and I thought it was an interesting way of expressing your opinion. The site designer is using a headline from around the world as inspiration to express his views—while also using it as a method to improve his design skills.

Mr. Ming - The news in type

NOTE:
I think understanding all points/sides to any situation is important. The more you read about oposing views to a situation, the more it helps you to understand the overall picture.

Ten years ago, this would have been a dream concert for me. I'm still a big fan of Dream Theater and Fates Warning, so I'm definitely planning on trying to make a show, but I really got bored with Queensryche after the album "Empire." I'd much rather see DT/FW headline, w/Queensryche opening!

Jim Davis over at "The Depressed Press of the Boston" web site recently posted a pretty good guide on ColdFusion and how it handles variables. It goes into a lot of depth and looks like a very good resource—especially for those new to the ColdFusion world.

Came by these blogs this afternoon which I found interesting:

Two Iraqi sleeper cells planning attacks on U.S. interests have been arrested abroad, a Bush administration official said on Friday, saying one of the groups was taken into custody in the Gulf region.
- WASHINGTON (Reuters)

Maybe it's just me, but I love listening to Rumsfeld when he handles questions from the media. He absolutely cracks me up. He typically does a great job keeping the media at bay and making their questions sound ludicrous (which often they are.) When they try to put words in his mouth, he simple replies: "Those are your words, not mine." I just get a kick out of how well he handles the media.

At the end of the FlashForward Keynote this morning, Kevin ran a video from one of the Macromedia engineers who is working on some new technology (code named Royale) that we are working on. He showed a Flash based input form with multiple sections. He then showed the code used to build it, which was written entirely in XML. Not only was the entire Flash application created from the XML file, but so was all of the databinding (SOAP Based), ActionScript and StyleSheets (yes, Cascading Style Sheets).
- Mike Chambers' Blog

I sure hope this is based on the XForms spec. It could go a long way to advancing the usage of XForms in the developer community. If this is a properitary XML format, I'll be pretty disappointed since the XForms spec is pretty complete and lays out just about everything you'd want to do with a Form. With all my work on qForms, I've learned one thing—the current HTML implementation of forms leaves a lot to be desired. I'm still not sure I'm sold on the performance of RIA in Flash, but performance does seem to be getting better.

Here are some interesting satellite photos that were taken on March 27, 2003. You can compare the images to older images to see the difference. As you can tell, it appears the precision of the bombings has been quite precise.

Jennifer and I are headed to her parents house in Niles, OH this weekend. One of her friends is a dog groomer, so we're taking Maddie in for a bath and to get her nails trimmed—her dew claws are like razors!

Oh, and my brother Jeff made a surprise stop by the house last night. He had some business in Columbus yesterday, and stopped by the house before heading back to Springfield. It was a pleasant surprise. We don't get to spend as much time together as I'd like. We hung out for a couple of hours before he headed back home.

NOTE:
Also, for those of you who don't know, he's finally finished at Wright State University! I'm so proud that he graduated, and even prouder of the fact that he's continually made good grades. 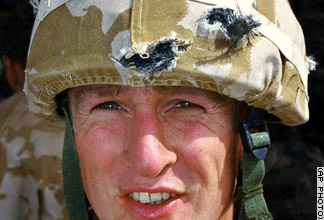 De Villepin refuses to answer which side he's on

French foreign minister Dominique de Villepin gave a talk at London's International Institute for Strategic Studies in his first visit to Britain since the outbreak of war.

During a question and answer session at the end of his speech he refused to answer the question: "Who do you want to win the war?"
- Sky News