Layin' the smack down!

Ok, I don't know what this dude did, but he out to just give up. The dude must be really drunk. The two funniest parts of this video are when the little girl tries to show her mom something and the mom's like "not now honey" and when the cop car goes by and doesn't stop.

The complete third season of Mr. Show with Bob & David is supposed to be released in August 2003. If you've never seen a Mr. Show episode, I'd recommend renting Seasons 1 & 2 on DVD—it's by far the funniest show no one ever saw. I just wish HBO would have pushed this show more. Even though I had HBO at the time, they did a lousy job promoting the show so I never started watching it until I caught a re-run one night. I've been hooked ever since.

With their first 2 picks in the draft, Dallas selects... 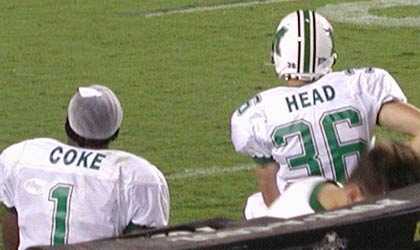 Don't believe the above image, check out Marshall's 2002 Football Roster.

Humor: The world is going crazy...

You know the world is going crazy when the best rapper is a white guy, the best golfer is a black guy, the tallest guy in the NBA is Chinese, the Swiss hold the America's Cup, France is accusing the U.S. of arrogance, Germany doesn't want to go to war, and the three most powerful men in America are named "Bush", "Dick", and "Colon".
- Chris Rock